The Aces travel to Bethesda tonight for Game One of the Cal Ripken Collegiate Baseball League’s Championship Series. They face off against the first place Bethesda Big Train, which won the CRCBL division with a 27-8 record. The Aces placed second with a 20-15 record. Both teams swept their first round opponents to advance to the championship round.

Left hander Nate Young of George Mason will start for the Aces. Young was 1-0 in 12 games pitched during the 2021 summer season with 20 strikeouts and a 2.93 ERA.

Mark Kattula leads the team in hits during the playoffs with five. Four players are tied with three hits. Kattula also is the team leader in RBI with three. Justin Cassella has two home runs in the playoffs.

The League Championship Series schedule is as follows:

The Aces blasted 15 hits. Garrett Farquhar had three hits, scored three runs, picked up two stolen bases and drove in a run. First baseman Mark Kattula knocked out three hits, driving in two runs and bringing his team leading RBI total to three in the playoffs. Justin Cassella has hit home runs in both playoff games and designated hitter Scotty Morgan hit a bomb in the top of the ninth to put the icing on the cake for the Aces.

Relievers John Armstrong and Blake Burkhalter each pitched two innings in relief and only allowed one hit each. Burkhalter struck out the side in both of his innings.

The Aces advance to the CRCBL Championship Series and will face the Bethesda Big Train. The series starts Thursday evening at Shirley Povich Field and will continue at Frank Mann Field on Friday evening. Game Three, if necessary, will be played on Saturday.

The Aces travel to Silver Spring today to play the Silver Spring-Takoma T-Bolts in Game Two of the Cal Ripken Collegiate Baseball League 2021 playoffs semifinals. Game time is 7pm. If the Aces win tonight, they will advance to the CRCBL Finals. If the T-Bolts prevail, Game Three will be played at Frank Mann Field in Alexandria on Wednesday evening at 6:30pm.

Left hander Connor Campbell will start for the Aces. Campbell is 1-0 with a 2.25 ERA and five strikeouts. First baseman Mark Kattula comes into this game batting .429 over the last seven days and outfielder Justin Cassella leads the team with four walks over the past week.

The T-Bolts will start Joe Sarich in Game Two. Sarich has pitched in nine games with a 1-0 record and a 3.96 ERA. Infielder Stephen Rice finished the regular season with a team-leading .377 batting average and had two hits in Game One.

The Aces win Game One of the Cal Ripken Collegiate Baseball League 4-1 over the Silver Spring-Takoma Thunderbolts at Frank Mann Field in Alexandria Sunday night. Derek Sivec pitched into the seventh inning and gave up no runs on five hits with five strikeouts in a stellar playoff performance. He picks up the win. John Armstrong entered the game in the seventh inning with the bases loaded and only allowed one inherited runner to score. He struck out four batters in his two innings pitched. Blake Burkhalter pitched a perfect ninth inning to close the door.

Bobby Zmarzlak carried his strong regular season play into the postseason, reaching base three times with two hits and two runs scored. Infielders Mark Kattula and Connor Offshack also added two hits and each drove in a run. Justin Cassella launched a bomb over the fence in the bottom of the fifth inning to add on to the Aces’ lead.

The series now moves to Silver Spring where the Aces will go for the series win at 7pm at Blair Stadium on Monday evening, July 26.

The Aces start the Cal Ripken Collegiate Baseball League playoffs tonight, Sunday, July 25 at 6:30pm at Frank Mann Field. The Aces will host the Silver Spring-Takoma Thunderbolts. This is the first game in a three game semi-final series. The winner of this series will face the winner of the Big Train/Grays series for the league championship. The Aces start the playoffs as the number two seed, finishing the regular season with a 20-15 record.

Derek Sivec will take the mound for the Aces. Sivec has started seven games for the Aces and has gone 2-1 in those seven starts with a 3.48 ERA. Sivec is fifth in the CRCBL in ERA. Outfielder Bobby Zmarzlak enters the playoffs blazing hot, ending the regular season with a .375 batting average and leading the team in home runs with five. Infielder Garrett Farquhar leads the team in RBI with 30. 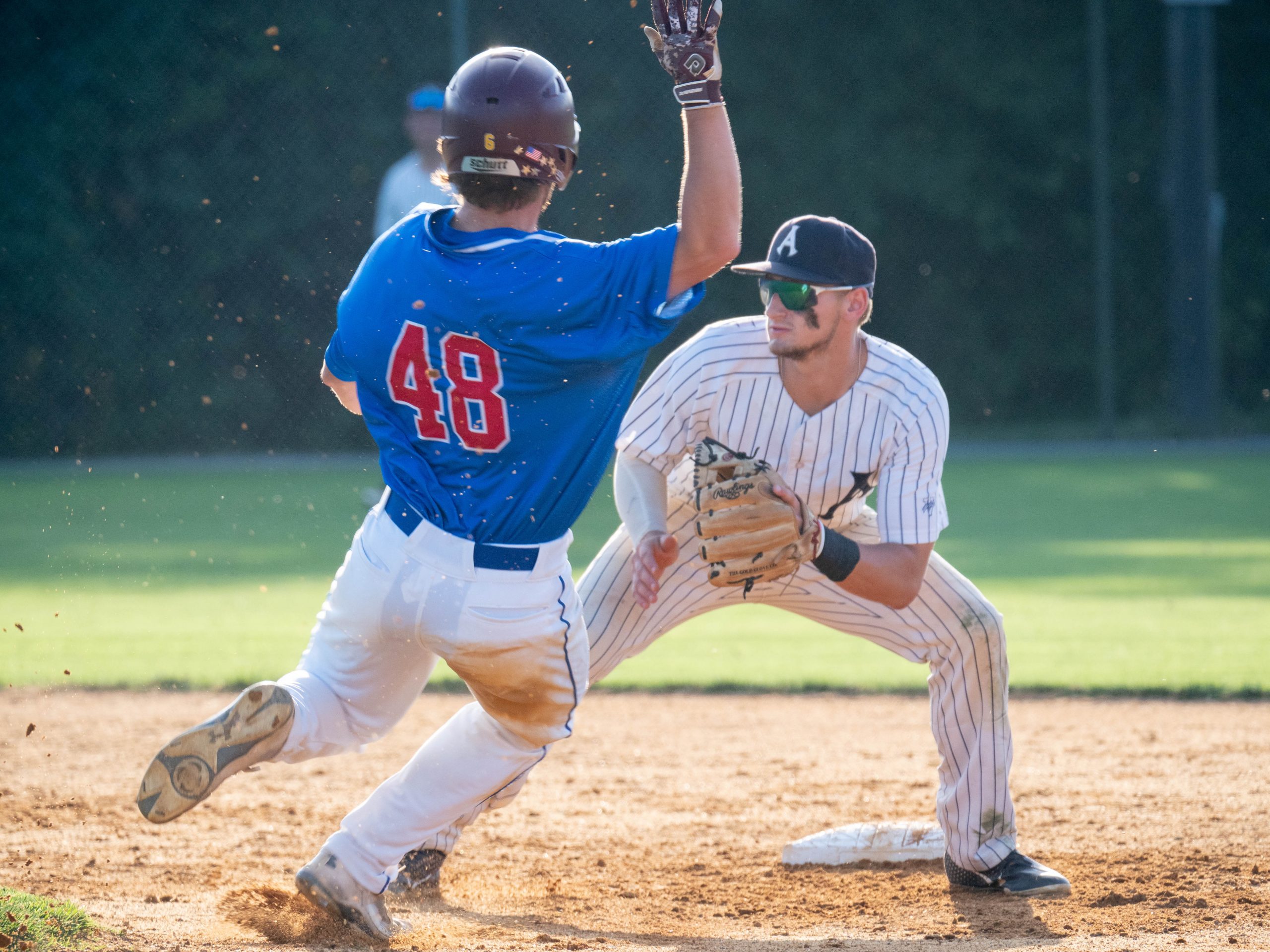 Your Alexandria Aces finished the 2021 regular season with a 20-15 record, good for second place in this year’s Cal Ripken Collegiate Baseball League standings. The Aces head to the playoffs with a game Sunday evening, July 25 at 6:30pm at Frank Mann Field. We’ll see you there! 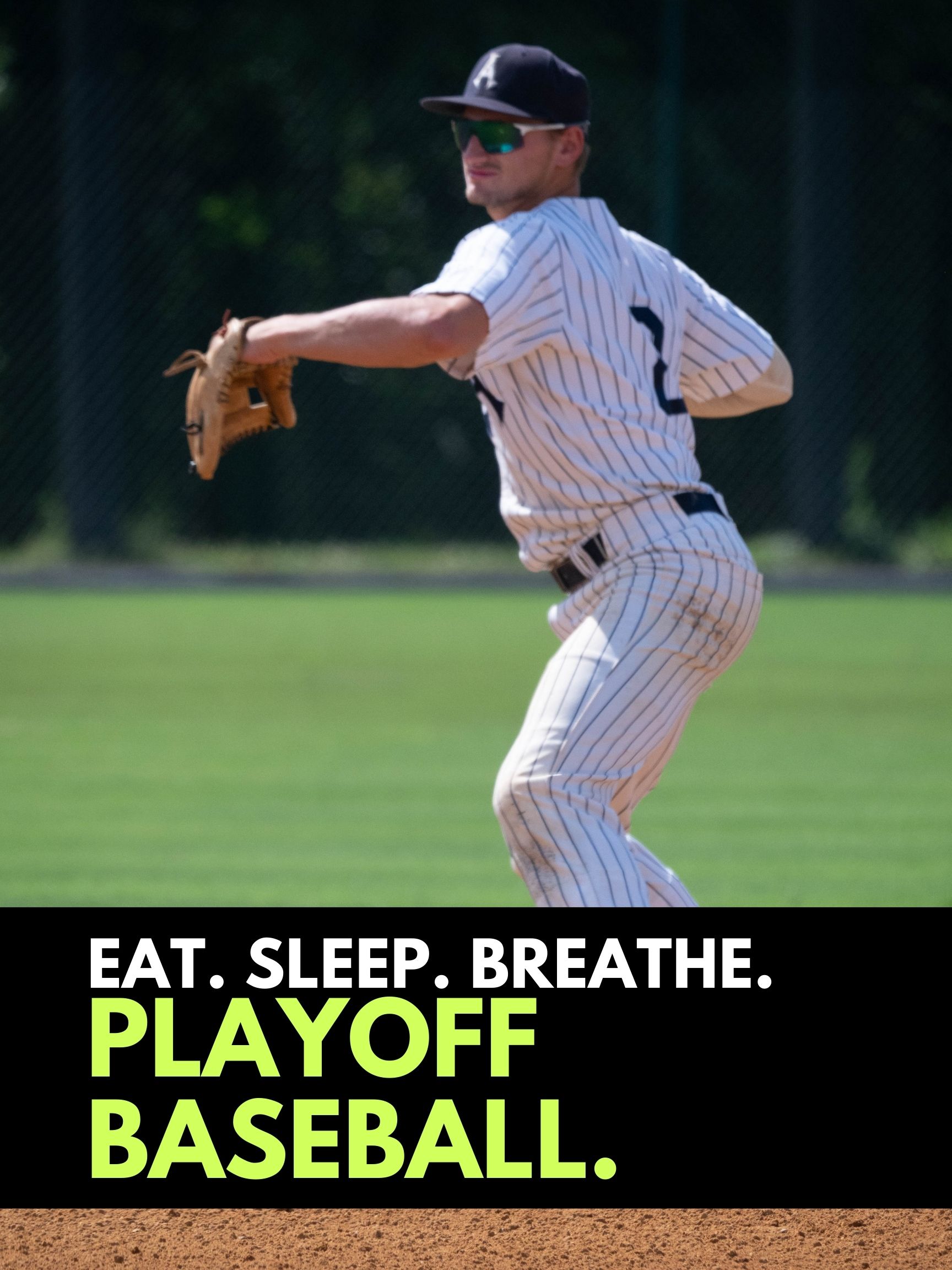 The Alexandria Aces travel to Gaithersburg taking on the Giants Friday from Criswell Field at 7 p.m.
The Aces are yet to beat the Giants this summer after two matchups and still seek their first win of the season on an 0-6 record. Gaithersburg leads the Ripken League at 5-2, just half a game up on the three-time defending champion Bethesda Big Train.
Jared Lyons (George Mason) is set to start for the Aces. His last outing against the Giants leads the club with five innings pitched for a perfect 0.00 ERA behind seven strikeouts in the lone start. The only run he allowed in the 3-2 loss reached on an error before swiping two bases and then home on a passed ball.
Zach Adams is slated to pitch for Gaithersburg. The right-hander made a single appearance going into Friday tossing one scoreless inning June 11 at D.C. in a 4-3 victory.
The Aces top the league in errors – 19 to their name – but have come alive offensively their past two ballgames averaging eight hits and seven runs per night over the span.
Additionally, the recent addition of Stephen Hill (Morehead State) has added a much-needed spark to lineup. His first game in pinstripes saw savvy defense at the hot corner to pair with an RBI single, RBI double, and a walk at the three hole.
The Aces missed their Thursday action with the Thunder Bolts in the schedule’s third rainout. Makeup dates will be announced soon as they are available. 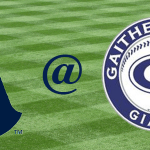 The Aces had a much better defensive performance in the second game of the season, but the bats came up short in a 3-2 loss in Gaithersburg on Wednesday night.

Pitching and defense was the story for the Aces through the first seven innings. Jared Lyons (George Mason) started strong, pitching five no-hit innings, giving up one unearned run, walking none and striking out seven Giants hitters.

“Our pitching was outstanding tonight. They filled up the zone. Jared was just lights-out out there,” said Head Coach Chris Berset.

Lyons was around the strike zone all night and dominated Giants hitters. Pitching was much improved from opening night, but the Aces struggled to get the bats going.

Alexandria mustered just four hits in the game, two of which came on two doubles by Landon Langston (North Alabama). Langston led the ninth inning rally with an RBI double that scored Johnny Ceccoli (Auburn), but the rally fell short when Scotty Morgan (George Mason) grounded to first to end the ballgame.

Zach Fruit (Lansing CC) pitched two scoreless innings in relief of Lyons and kept the game tied into the late innings. After no-hitting the Giants through seven innings, the Aces gave up three hits and two runs in the eight and the Giants took a two run lead into the ninth.

It was an all-around better performance for the Aces in the second game of 2019, but there is still room for improvement as the season rolls on. The offense will look to be a bit more consistent and the pitching staff will try to spend more time in the zone. Still, there is plenty of time for the Aces to put some wins together.

The Aces will be back in action Thursday in Bethesda against the Big Train.

Aces Travel to Gaithersburg for Game #2

The Aces dropped the season opener at home against DC last night 10-6. Tonight, the team travels to Gaithersburg with hopes of securing the team’s first win of the season.

The Aces got off to a quick start in the opener, scoring in each of the first three innings. However, the bats went cold in the last six innings. The Aces combined for six runs in the first three frames, leaning on the bottom half of the order to get the job done.

The team will look for the entire order to get going and put together a more consistent effort tonight against the Giants. Aces hitters struck out 13 times in the game last night. Still, all nine Aces starters managed to reach base during the game. Javon Fields (Towson), Adam Schwartz (UConn), and Stephen Karis (Eastern Michigan) all reached base three times.

Defensively, the team made seven errors. A few of them leading to Grays runs. In addition to defensive miscues, Aces pitching struggled with command, walking 11 Grays batters.

Tonight, the Aces will look to put together a complete team performance and get the team’s first win of the season.

Gaithersburg won its first game of the season against the FCA Braves last night by a score of 3-1. It was a much different type of game than the Aces played a night ago. The Braves and Giants combined for five hits and four runs.

Gaithersburg scored two in the first and one in the fifth and that was all the Giants needed. David Hutchison got the win and Matt Watters picked up the save for Gaithersburg. Watters was effective against the Braves, so it will be important for the Aces to have a lead going into the late innings against Gaithersburg.

Expect a lower scoring game and a much cleaner game for the Aces in the second contest of the season.

First pitch is scheduled for 7:00 p.m. and you can catch all the action on mixlr.com/alexandriaaces.