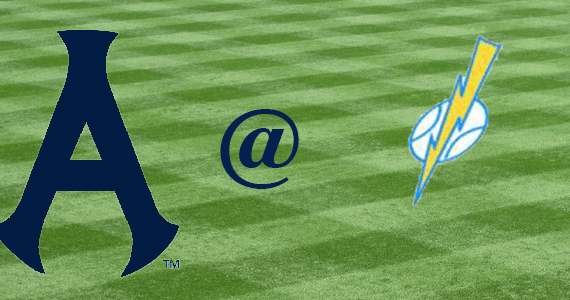 Aces travel to Silver Spring for a double header

The Aces have won four out of the last five games and seem to be hitting their stride after a slow start.

Even when the bats were quiet against D.C. on Wednesday, hitters were still able to find ways on base and score six runs.

The Aces, however, are still at the bottom of the league standings. The T-Bolts are in second place as it currently stands.

This will be the first meeting of the season between the Aces and T-Bolts after a rain-out last week.

Silver Spring has been near the top of the league standings all season and have played good baseball. Davonn Griffin (James Madison) and Tony Gallo (Lehigh) are both in the top five for batting average in the league.

For the Aces, Max Romero has continued his hot start. The young catcher walked four times in five plate appearances against D.C.

Pitching has been much better for the Aces as well. Jared Lyons (George Mason) was phenomenal in five innings against the Grays.

Tyler Briggs (UConn) is scheduled to get the start in game one after a great performance his last time out. On June 15th, Briggs held the Braves to two runs on five hits over five innings. He struck out three and walked two in that outing and got a win to even his record this year to 1-1.

Briggs will be opposed by Yash Rane. Rane is 1-0, but has an 8.00 ERA in two starts and has proven to be a bit wild with his control.

In game two, Seth Marano (Lansing CC) will make his second straight start as a part of a double header. Marano pitched five innings against Bethesda last Sunday in game one of the double header, allowing four runs on six hits.

Bradyn Kail gets the ball for Silver Spring in game two. Kail is 1-0 with a 6.30 ERA this year.

Both games will be seven inning affairs. Game one first pitch will be at 4:30 and game two is scheduled to start at 7 p.m. Both games can be heard on mixlr.com/alexandriaaces.