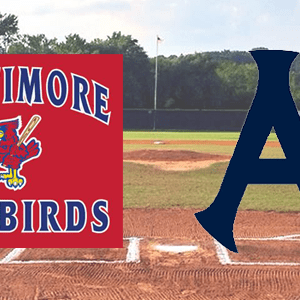 Sometimes in baseball, one pitch, one play, one hit, can make the difference in a game. Unfortunately, that occurred for the Aces in their loss to the Baltimore Red Birds at Frank Mann Field on Saturday.

With the score tied at one with the bases loaded and two outs in the top of the seventh inning, Aces pitcher Matt Moore (Purdue), in a 1-2 count to Red Birds centerfielder Bo Majkowski (Celemson), hung a slider up in the zone that Majkowski crushed to deep to right-center field to break the game open for the Red Birds. Sometimes, that’s just baseball. That would be the difference in the game as the Aces fell to the Red Birds 7-1.

Leading up to Majkowski’s grand slam was a pitcher’s duel between the Red Birds’ Cole Beavin (East Carolina) and Aces starter Cole Lalonde (Century CC). Beavin pitched well, going five innings with two strikeouts and a walk. Lalonde, on the other hand, pitched the best game of his Aces career thus far, going five innings as well with two strikeouts and having no walks. For a ball player who has had trouble all summer walking multiple hitters in every start, he was ahead against all but one batter he faced tonight. He had his fastball command working, starting almost every count to the opposing Red Birds hitters 0-1. He was able to force the Red Birds to hit ground ball outs and the occasional fly-out all for his defense to make plays. Throughout the game, a viewer could see Cole’s confidence growing on the mound, which was a great outing against the Cal Ripken North Division winners.

Each pitcher allowed one earned run in the fifth inning. In the top of the fifth, Red Birds’ designated hitter Will Harless (Radford) hit an RBI single to score Tim Elko (Ole Miss). In the bottom of the fifth, the Aces tied the game on a solo home run from Aces leader Ethan Cady (East Tennessee State) as he crushed a pitch over 300 feet in left-center field.

The Aces will have an off day on Sunday. Entering the final week of the season, they will make one last push to make the playoffs as they battle the FCA Braves for the sixth and final playoff spot in the Cal Ripken Collegiate League.