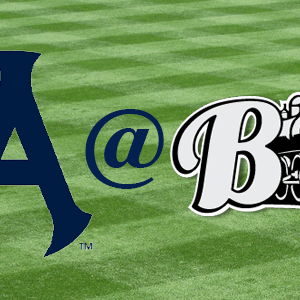 Despite a good pitching performance from Will Liverpool (West Virginia) the Aces fell to the Big Train by a score of 4-1.

The Big Train started off tonight getting a run in the first inning on an RBI double from first baseman John Glen (Cal Baptist). Ethan Cady (East Tennessee State) would tie things up on a solo home run to deep left centerfield.

The minor mistakes for the Aces proved to be costly in this game though. In the third inning an error on Tristen Jorah (Wayne State) would score Tyler Villaroman (San Francisco). In the fourth the Big Train would score on a throwing error by Nate Mallot (Ohio) as his throw to Luke Balanger (Radford) went past his glove to centerfield when trying to tag out Ude Summerall (Florida Atlantic) at second base on a steal attempt, which allowed Jacob Westerman (San Francisco) to make the score 3-1. On the next play Chris Alleyne (Maryland) misplayed a ground ball that allowed Summerall to steal home, making the score 4-1 Big Train.

The Aces had a chance to cut into the deficit in the eighth inning. After Big Train starting pitcher Chris Clark (USC) went seven innings allowing Cady’s solo homer with eight strikeouts, the Aces forced the Big Train bullpen to play on their toes. With one out in the top of the eighth Luke Balanger walked, stole second, and stole third as Connor Bacon drew a walk. With runners on the corners with one out Alleyne and Jorah would both pop out within four pitches to end the threat.

Despite playing a well fought ball game, the Aces had a few minor errors that made the difference in tonight’s ball game.

“When you make little mistakes to a good ball club like the Big Train, they are going to take advantage and make you pay for your mistakes,” said Aces Head Coach Chris Berset. “We hit some hard balls tonight but just couldn’t get the job done.”

The Aces look to get back in the win column as they face the FCA Herndon Braves tomorrow at Annandale High School at 7:00pm.